During the economic boom, The USA was the lead country in making durastic developments in technonogy. The concept of mass production meant thta large quantites of products, could be manufactured and was first implemented by the CEO of worldwide car brand, Ford. Before this car had been unafordable, due to them being produced, step by step by hand. However by 1913, Henry Ford managed to develop an electric conveyor belt or "magic belt"to quickly assemble car parts on mass. This was an effecient method, but left workers with not much to do, so to lesson their boredom, Ford decided to increase their wages. The postive effect of the assembely line was shown through the time taken to asssemble a Model T, or Tin Lizzie, reducing from 13 hours, to 1 hour 33 minutes. Due to this, the cost of a Ford car fell from $850 in the year 1908, to $290 in 1925. In this time over 15 million of these cars were manurfactured and sold to costumers. 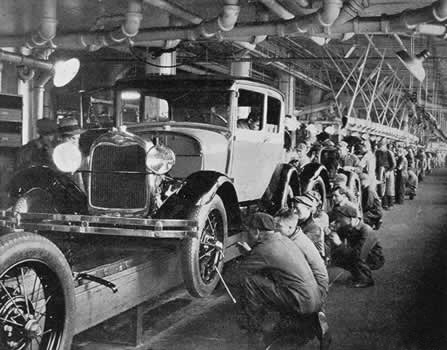